Gut health and Intestinal Integrity (I2) support bird and flock production efficiency. The the core functions of the intestinal tract are digestion, secretion, nutrient absorption and nutrient transport. Disrupting the function of the intestinal system inhibits performance, average daily gain and feed conversion. 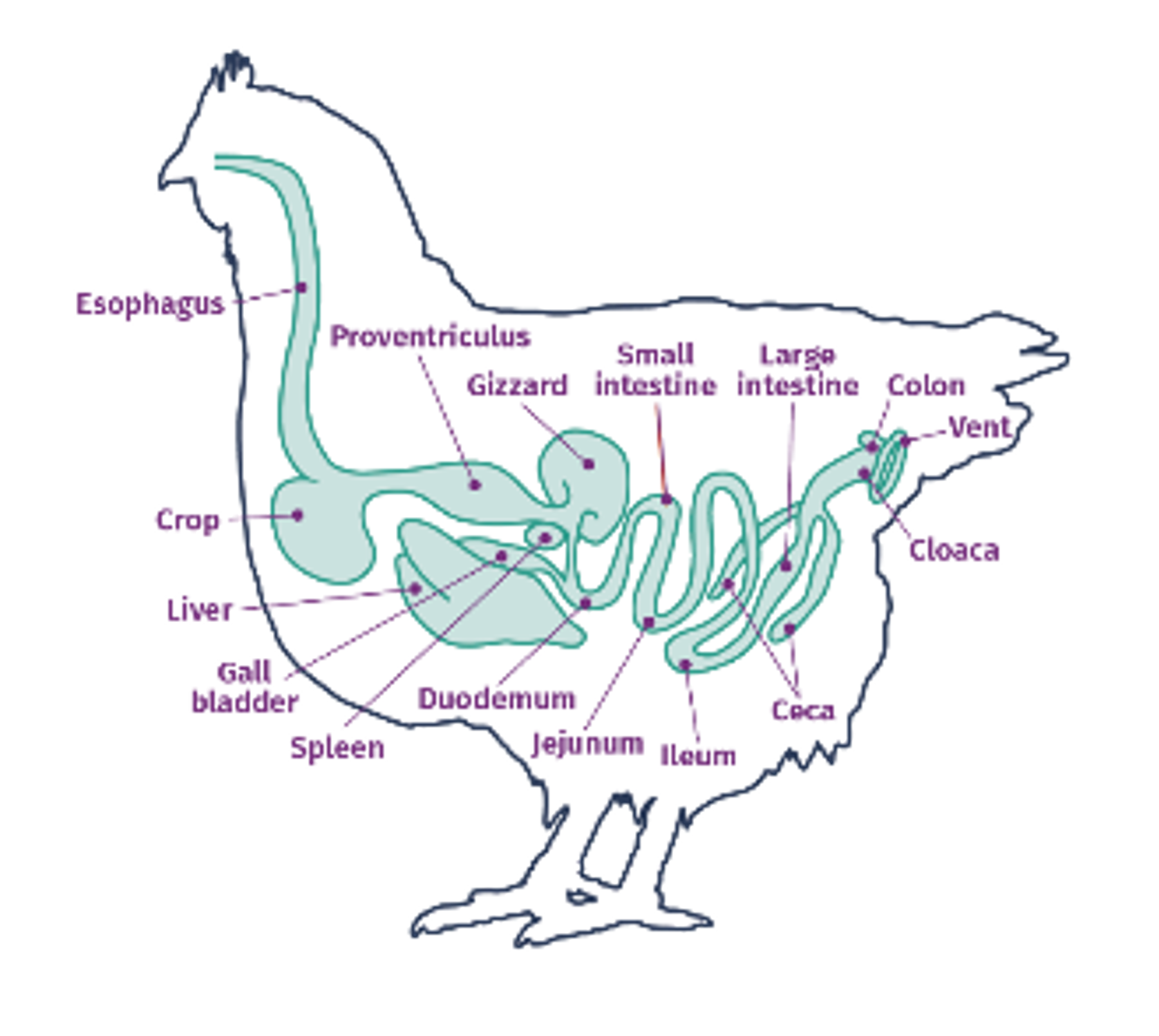 The Intestinal Integrity (I2) index is a weighted report, unique to HTSi, that analyzes the overall intestinal health of flocks. The index can function as a driver of broiler health and performance as a link has been established between better Intestinal Integrity and improved average daily gain (ADG), feed conversion ratio (FCR) and European production efficiency factor (EPEF).3 The score established in the I2 index is based on evaluation of 23 key lesions reviewed, including coccidia, during healthy bird necropsies. Data from the lesions tracked are used to calculate an I2 score and provide performance indicators to producers. A perfect Intestinal Integrity (I2) index score of 100 means no potential loss from gut health was detected. The review also monitors intestinal health over time, which allows interventions to be employed, and can be used to establish what is “normal” for an area, farm or season.

A perfect Intestinal Integrity (I2) index score of 100 means no potential loss from gut health detected at this time.

Globally, Intestinal Integrity (I2) have averaged 94.97 for the last 10 years, however, during that period regional results were bookended by Asia Pacific and Latin America on the low and high sides, respectively.

In the last 10 years measures of intestinal health demonstrated the consistency producers in different parts of the globe are experiencing. Producers in several regions have witnessed slight improvements in gut health year by year, while those in Asia Pacific have seen the most positive development.

Asia Pacific producers have seen the most consistent improvement in the last decade, while other regions presented more consistency and smaller, slower improvement from 2010. However, some regions like North America and Europe, Middle East, and Asia saw peak performance at the mid-point of the decade.

I2 by bird age

Bird Intestinal Integrity (I2) can be influenced by age as some intestinal diseases occur earlier than others.

Birds tracked using the HTSi system can vary in age. Bird information is recorded on about day 26 of production. However, in 2020, the information posted applied to birds ranging from 5 days post-hatch to 65 days old. Bird age can influence health tracking as some diseases occur earlier or later in production and I2 index tend to decline from days 0-25 before leveling off. However, some regions will see continued decline further into the production period.

Bird health tends to vary wildly toward the end of the production period when new disease outbreaks can occur. This could bring particular challenge for producers working with slow growth birds.

While gut health tends to decline until birds reach about 30 days of age, extreme variation at the end of production cycles could indicate new disease breaks and provide particular concern for producers in Europe, Middle East and Africa and Asia Pacific. Lesion scores for E. acervulina, E. maxima, E. tenella and E. necatrix range from 0-4 where 0 indicates no lesion.

Coccidiosis is one of the most expensive broiler diseases, potentially costing global producers up to £13 billion ($18.1bn) annually.2 Coccidiosis is a major driver of intestinal damage present in multiple geographic regions. Unfortunately, attempts to eradicate the disease have not been successful. Its presence is linked to reduction in bird performance and reductions in welfare, which make the disease an ongoing concern. It also has been tied to the development of necrotic enteritis. It is considered one of, if not the most, costly disease faced by poultry producers. In 2016, it was calculated that the total losses for producers in the UK was £99.2m ($138.1m) and, on a more global level, ranged from £7.7-£13 billion ($10.7 - $18.1bn) based on losses in three areas:2

Three strains of coccidia – Eimeria acervulina, E. maxima and E. tenella – cause the majority of problems for producers globally, while a fourth – E. necatrix – brings challenges to producers in Asia Pacific.

While coccidia overall presents a primary challenge for poultry producers, the four main strains of the pathogen appear with differing frequency and severity depending on region. Each coccidia strain generates distinct lesions and targets specific sites in the gut, which can be used to identify the strain and assess severity of the infection. 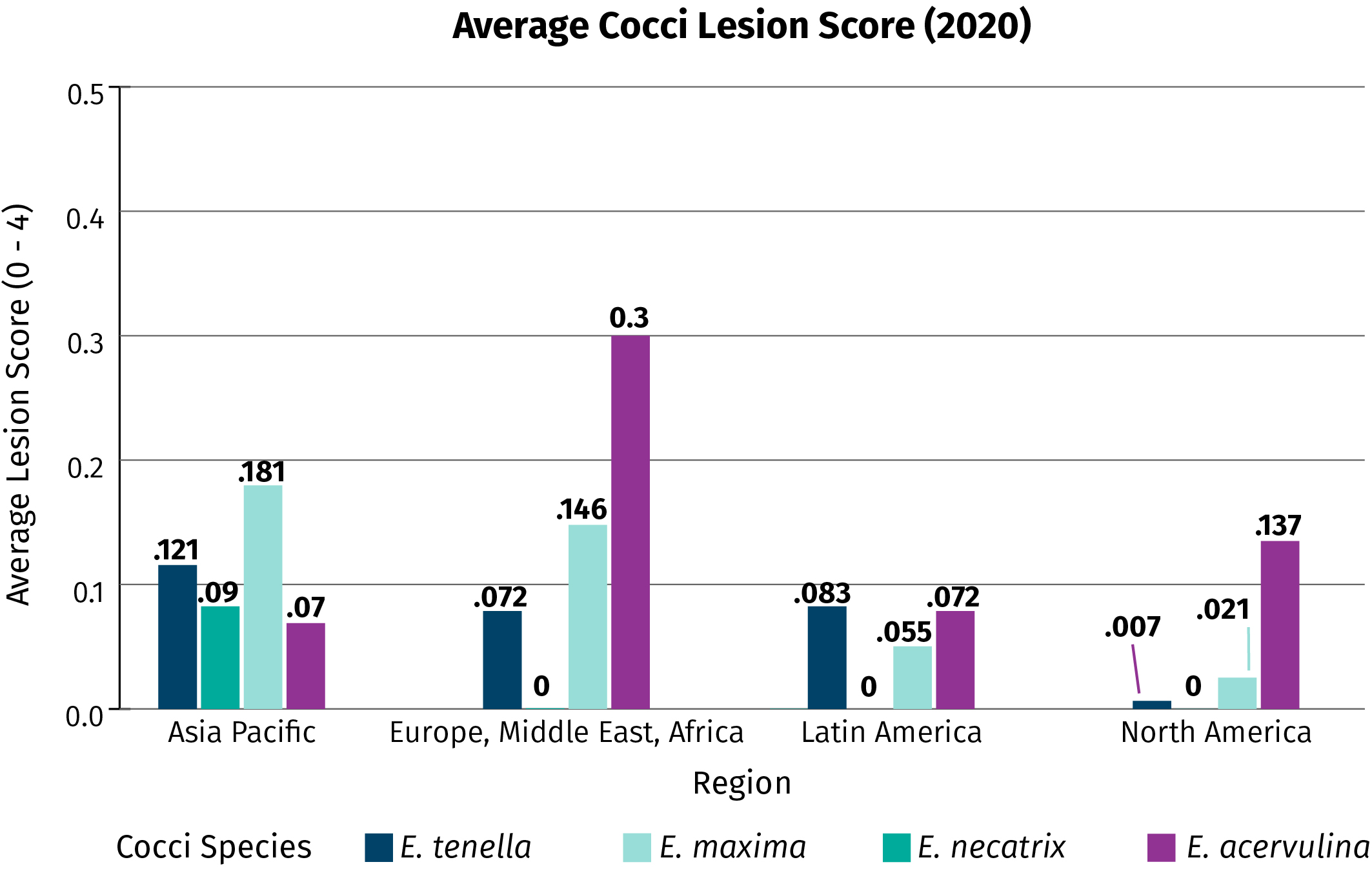 The four main strains include:

The presence of specific strains of coccidiosis brings different challenges for producers based on where they are raising birds and the production methods being used.

Coccidiosis throughout the year

Coccidia remain a common challenge for poultry producers throughout the year and many regions see consistent levels of challenge regardless of disease strain or season. However, producers in North America and Europe, the Middle East and Africa may face additional challenges at specific times. Assessing mean Intestinal Integrity (I2) data month by month for a period of several years highlights the need for additional proactive interventions during early spring for – for Europe, the Middle East and Africa and North America - and in June for the Asia Pacific region.

Both Europe, the Middle East and Africa and North America tend to see higher average levels of acervuline regardless of month, but producers in all regions indicate that coccidiosis remains a year-round challenge.

In addition to cocci, there are other challenges that cause damage to I2 and carry identifiable pathology, even if the root cause is harder to track. Some of these include cellular sloughing, excessive intestinal fluid or watery content, and gizzard erosion.

Looking region by region, producers in Asia Pacific and Latin America have been lowering scores from cellular sloughing.

The presence of excessive fluid in the intestinal tract upon opening, or noticeably increased content in droppings. It may be evaluated by other diagnostics.

Producers in NA and Asia Pacific have more room to improve in dealing with generation of watery content, however, Latin America and Europe, the Middle East and Africa have demonstrated more success.

Examination of the gizzard lining for evidence of erosions and ulcerations. Even though the lining of the gizzard is very tough, certain toxic compounds associated with feed can erode it. Biogenic amines result from spoilage or improper processing of certain proteins, especially meat meals and fish meals. Increased amounts of copper sulfate can increase gizzard erosion. Ingredient quality is the most effective strategy in prevention of gizzard erosion.

While the Asia Pacific region has seen improvement in average GIZ lesion scores, Europe, the Middle East and Africa have seen a steady increase in average lesion score.

The presence of excessive mucus in the intestine. Although mucus production is a normal digestive function, certain disease agents (coccidia, bacteria, viruses) and feed toxins can stimulate excessive mucus production. Research has shown that Clostridium perfringens, the leading cause of necrotic enteritis, can use mucus as a growth medium and energy source, further exacerbating bacterial enteritis.

Looking at mucus as an indicator of intestinal health indicates that producers in several regions have more work to do.

The presence of undigested feed in the large intestine or feces, comprising greater than 25% content. Feed passage is an indicator that digestion is sub-optimal or transit time is too fast and adversely affects caloric conversion.

Mucus production and feed passage are indicators of intestinal health, which have been trending negatively for producers in some regions even as Asia Pacific and Latin America regions improve.

The diagnosis of necrotic enteritis due to Clostridium perfringens. Clinical necrotic enteritis results in substantial intestinal erosions and can lead to marked increase in mortality. The performance and financial significance is readily recognizable. These clinical flocks will also suffer from uniformity issues due to high levels or morbidity. Subclinical necrotic enteritis presents the larger challenge for the poultry industry. This condition develops from compromised Intestinal Integrity and reduces performance without overt signs or mortality or even morbidity.

There are regional variations in the levels of Necrotic Enteriris reported across the last decade, however most regions are seeing improvement.